Questionable Comics is a series where Dan Hill surveys professionals from every corner of the comics industry about their methods and experience. First up today is Becky & Frank, one of comics’ most charming duos, making their mark in the indie sphere with fun series like Capture Creatures, Tigerbuttah and Tiny Kitten Teeth. Becky is also currently working on the Disney series Star vs the Forces of Evil, which was recently renewed for its fourth season.

Becky: I’m currently working on Star vs the Forces of Evil as a character designer. On top of that Frank and I are both working on two secret development projects for animation. And we just released a new mini comic called Bustletown!

Becky: At Disney I have a ton of space and I keep it mostly clean. At home I have a desk and it’s always covered in cat hair. Both places I have a lot of cute toys and pictures as decorations.

Frank: We shared a desk for a lot of our careers, but I’m freelance and Becky’s at a studio now so that’s weird. For awhile our desks were separate to accommodate a larger painting space for Becky, but now at home they’re pressed back together!

I need my work-space COMPLETELY free of anything that can distract me. Anything can set me off. My phone has to be on silent, face down. It’s ridiculous, adult ADD is a problem.

Frank: When I’m writing I listen to mostly electronic music. Weird chillwave stuff, future funk. I still love Underworld (and the most recent Leftfield album is pretty cool). I post some playlists of that stuff on my Soundcloud.

When doing office stuff I’ve been getting back into hip-hop, I used to DJ hip hop for a little indie radio station and parties when I was a little younger. There’s so much interesting stuff happening in semi-mainstream hip hop right now with people like ScHoolboy Q and Vince Staples.

Becky: Make sure to take breaks every hour and a half.

Frank: I practice self-compassion pretty extensively now, try not to judge myself. I used to beat myself up over my work habits, cause I would see artists who could work all night and all day. That’s super unhealthy. Be kind to yourself.

A page from Becky and Frank’s new minicomic Bustletown

Becky: Usually I just go straight into drawing. But lately I have been doing five minutes of gesture drawings before I start working. I use these two websites: http://www.quickposes.com and http://artists.pixelovely.com

Frank: It’s pretty specific for me. Wake up, gym, breakfast, cafe. I do my writing mostly in a notebook at the cafe for about two hours, then I come home, have lunch and hopefully edit in the afternoon/deal with office stuff. Only way I can be productive is by hammering on those kinds of things. I also use a pomodoro timer.

Becky: The past year I’ve been using a Cintiq for 99% of my work. But I’m mostly know for my physical gouache paintings.

Frank: I just want more confidence in the stuff I make.

Becky: The morning, cause I have the most energy then. But also sometimes at night because there are less distractions.

Frank: The morning and only the morning. The night is bad. Night is for food and sleep.

Frank: There are so many great artists and writers out there, but my favorite is Chris Onstad who makes Achewood. Achewood is a perfect comic. I also love PG Wodehouse. I like light, fun things. 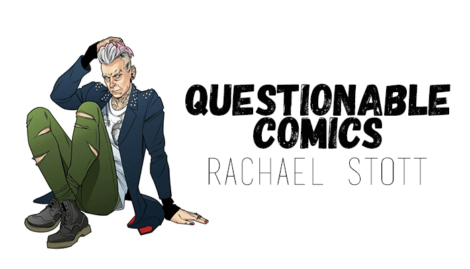 Rachael Stott is a dynamic new artist who made her comics debut in 2015 with IDW’s Star Trek/Planet of the Apes: The Prime Directive and has already racked up other credits at Image, Boom, DC, Archie and more.

Very tidy and spartan at the beginning of a book. I work digitally so it’s literally just a desk, my laptop, a tablet, and a big mug of pens, sonic screwdrivers, and some action figures jammed in there that I use for reference. As the work goes on though it does tend to get pretty messy, mostly groaning under the weight of books I chuck on there after flicking through to look something up. It also tends to be where I do my makeup, and I have a bit of a Jackson Pollack technique for doing that.

A lot of podcasts and soundtracks. It rotates onto something new every few months, but at the minute I’m obsessed with a podcast called My Favorite Murder, I save new episodes for when I have to do something a little tedious, like inking lots of grass.

The first pro artist I ever met was John McCrea, at a comics workshop when I was a teenager. He’s given me so much help over the years, but the first bit of advice he gave me when he saw the first ever pages I drew, was to use reference. Because I wasn’t, and everything was cartoony because it was just from my own head, it looked like ‘Everything was taking place in The Simpsons‘. 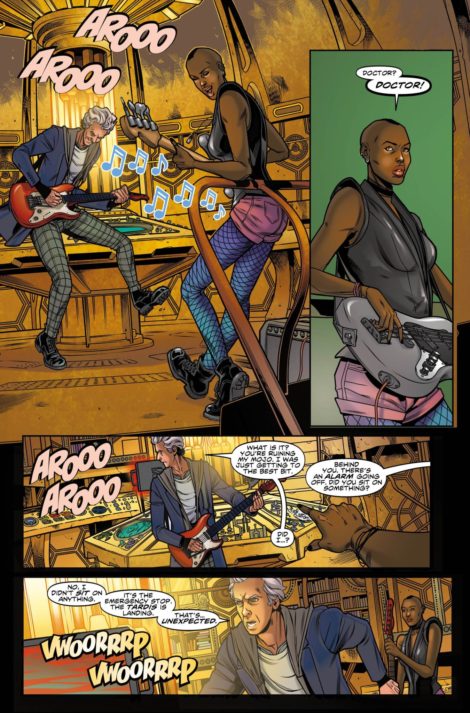 A glammy page from Rachael Stott’s Doctor Who run

I read a tweet by Bryan Hitch once where he says he just has to concentrate for 45 minutes then he’s okay for the rest of the day, but that first bit is the hardest, and for me it’s the same. I have to chuck my phone into another room, turn off all distractions, and just focus on it.

All digital. Occasionally I’ll do roughs on paper if I’m traveling somewhere, and I do con sketches with pencil and copic, but my published work is all digital.

I think my work looks very ‘try hard’. I like putting lots of details in, and negative space makes me nervous because I feel like if I haven’t filled the page then it doesn’t look right. So I know that’s a sort of artistic confidence that’ll come to me with more experience and time, but for now that’s a weakness I’ve noticed. Like all the best artists make it look easy to an untrained eye, mine looks like I put tons of sweat and tears in.

For me, usually, the night time.

For me, Mike Wieringo was a big influence growing up, also John Romita Jr’s storytelling, Frank Miller, Albert Uderzo’s ability to do comedic timing, Stuart Immonen for just being incredible and versatile. I recently rediscovered Norman Thelwell’s work- he did lots of books about ponies in the ‘40s and ‘50s that I read as a kid, and looking back I think he was a big influence on my silly sense of humour in my work.