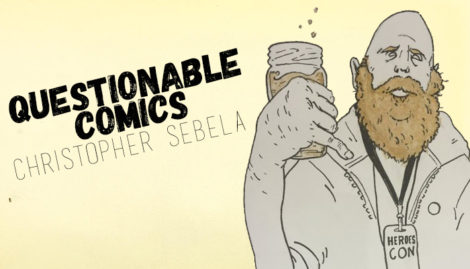 Questionable Comics is a series where Dan Hill surveys professionals from every corner of the comics industry about their methods and experience. First up today is comics writer Christopher Sebela, who has accumulated credits at most of the major comics publishers, including Boom, Oni, Image and Marvel.

– Escape from New York with Maxim Simic at Boom!

– A creator-owned book with Jonathan Brandon Sawyer at Stela.

– My home office is full of books and framed pages and a desk with a desktop computer and a cintiq. I tend to do most of my graphic design stuff here and very little of my writing, which I do 100% on my laptop.

– Anywhere else in my house. I get most of my daily writing done at the kitchen table or the table and chair in my backyard or sitting on the couch.

– The daytime coffeeshop. Down the street from my place, so I can take a long walk to think stuff out and then try to find a table not near some of my coffeeshop enemies or sit outside and suffer. They know me pretty well, so they don’t mind if I come and sit for hours.

– The nighttime coffeeshop. It has overhead heaters and outlets and is open all night, so it’s clearly the winner, it’s just far from my house, so I only go there anymore if I need to get a lot of work done in a short amount of time. 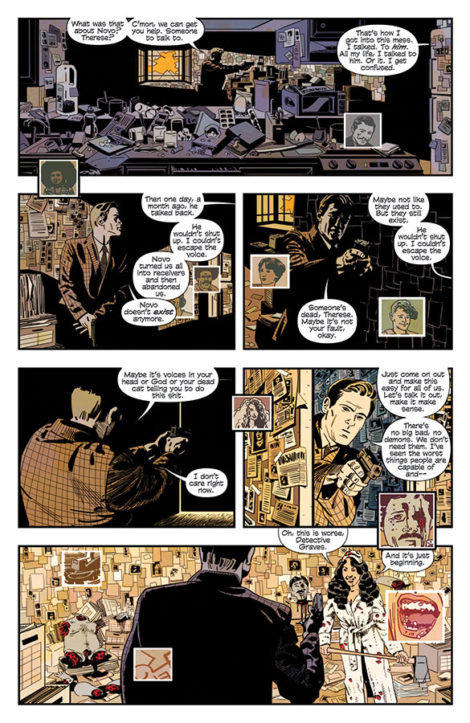 Depends on the project. For creator-owned books, like We(l)come Back, I set up a playlist that relates tonally or more directly, like something the characters might listen to or a song that I named an issue after. I listen to that usually leading up to starting work on the book and occasionally while working on it.

Sometimes it’s less involved and I pick a style of music that applies to whatever I’m writing. Like when I wrote Alien Vs Predator, I listened mostly to aggro dubstep, because that felt like it fit monsters in space tearing the jesus out of each other.

If I don’t want to think about it at all and just have something fill the spaces, I go with movie soundtracks or instrumental albums.

Sometimes I can’t be bothered at all and if I’m at a coffeeshop, I go without and half listen to people idly chattering around me and whatever terrible music the coffeeshop is playing and half do my best to completely tune it out. It’s my dumb zen state.

“Call your shots and move on.” It’s easy to get lost in any kind of writing where you start reconsidering that page you just finished or that panel you wrote four pages ago and then go back to make a “minor edit” that usually results in you hating everything and vowing to quit. I try to think of this advice when I’m in the weeds and wondering how I’ll ever get out: just charge straight ahead, do your thing and worry about how to fix it after you finish it.

Coffee and waiting for the sun to set. I do some writing during the day, but I find I don’t move into proper full-bore writing mode until after dark. I get my laptop ready, whatever analog notebooks I need, block the internet for anywhere from 30 minutes to 5 hours and start, either by actually writing or taking notes or outlining issues by hand. Eventually something good will come out, even if it’s preceded by a wall of junk, and if I get stuck on one thing, I luckily have a half dozen other things I can jump to to keep momentum going. 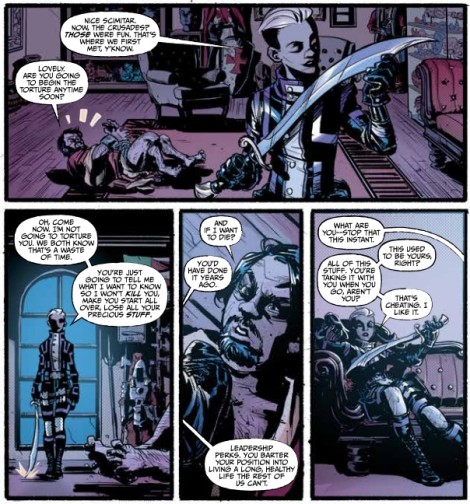 Full script forever. I would like to work in the Marvel Method at some point to see what it’s like, but I have just enough of the control freak in me that it’s something that doesn’t appeal to me yet.

Being less chatty. There’s a lot of talking in my books — people talking to each other or to themselves — and I apologize to my editors and collaborators and especially letterers almost every other script for it. I’ve come to accept this is a thing about my stuff and I like it (even if I end up editing a lot out on lettering passes) but I’d like to be able to say the same amount of things with less words on the page. Not sure if that’s possible for me, but it’s the quiet dream I have occasionally when I see how out of hand I get every now and then.

10pm to 4am is my magic window. Everyone’s already asleep or going to sleep, no one will call unless someone died, cars pass on the street less often and everything gets quiet and still. But when deadlines are pressing, I can write at any time. But daytime mostly feels like the time for admin duties and getting my thoughts together about what I’m gonna do that night. 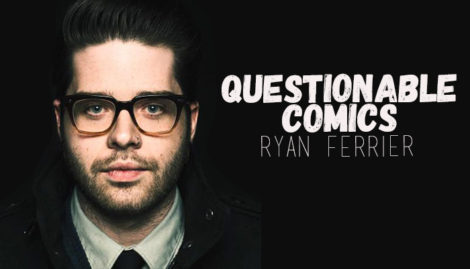 Next is Ryan Ferrier, who has been blowing up in the indie comics scene lately thanks to work on series like D4VE, Kennel Block and Curb Stomp.

I’m currently working on D4VE2 and Hot Damn for IDW.

It’s an organized chaos, not untidy by any means, but full. A simple desk with not an inch to spare, holds my iMac (framed in post-it notes), printer, hard drives, stationery, stacks of notepads, a silk-screened Devil Dinosaur print from Nakatomi Inc., and a pristine patch of table for my coffee.

To my right, a bookshelf of comics and various toys and sundries. Behind me, another bookshelf full of comps from books I’ve worked on, various prints and comic pages, and some lego.

There’s nothing on the white walls yet, but I have strategically placed an inspirational message above my desk, on white printed paper that simply reads “Do some fucking work, idiot.” It helps.

When I’m outlining a script or series, I’ll often take a notepad and pen to the couch and write by hand. Occasionally, I’ll script there, on my laptop. 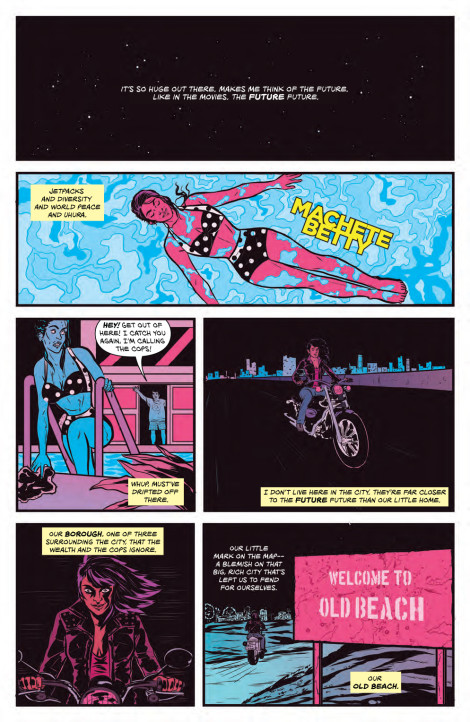 When I’m writing, nothing at all. I have this weird thing though, where I have to have my headphones on while I’m sitting at the desk, even if there’s no music at all. Maybe it’s an isolation thing, I don’t know.

I enjoy lettering because it’s the only time I can work on comics and listen to music–lettering is more muscle-memory, a more tangible task, than writing. What I listen to varies greatly on the day/week/month. Everything from film scores to hardcore to punk to honky tonk to rap to brit-pop. It’s all over the place. Right now I’m listening to a lot of Italian pop from the 1960’s, some Motown, and Dillinger Escape Plan.

I can’t remember the source, and perhaps it’s one of those quotes that’s been around for centuries, fitted for many contexts, but the one thing I always return to on a daily basis is “every day you don’t write, someone else takes your dream job.”

That’s a really profound statement, and it kind of fills you with dread, like you’re losing an opportunity, or someone’s taking what’s yours. But the fact of the matter is, it’s not–it’s about making your own opportunities and becoming the best you can be at your craft. Being the best, and getting/doing work, means you have to write every single day; or rather, when you can write, you really should. Because, like, it pays off, it really does.

If you want to be a writer, you have to write, simple as that. It’s an incredibly motivating quote. Apologies to whoever first coined the phrase, be it Poe, or Twain, or Bendis, or whomever.

I’m kind of alway in writing mode. I mean that in the way that I always want to be writing, and I–generally speaking–could always stop what I’m doing and write something. It’s not always good, obviously, but the act is something I could do–and most days am–morning to night. A by-product of that is that I’m a total hermit and am not social at all. There are sacrifices and consequences of that.

In terms of tackling a specific task, I tend to either make notes and re-read everything that’s come before it–say an outline or something–just to get back into the headspace. From time to time I’ll work on solicit copy or loglines just to stretch the old brain muscles as a primer.

But I think it’s pretty key to always be in that mode, even when you’re not. It’s a job, it’s a muscle, it’s a dedication–you really must flex it and train it, even if you’re not really “feeling it” that day. 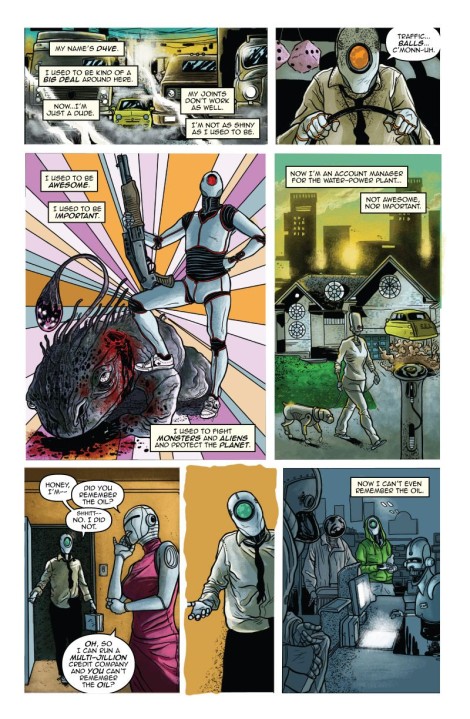 I have written in both styles, and they both have their differences and places, sure.

I’m working on improving my panel-counts, and breakdowns per issue. Four-issue minis are the thing right now, and my brain often works with five or six in mind, so it can be difficult to say and do what I want to say and do within each issue. That’s just par for the course though, that’s just mathematics.

I’m certain there’s many things I need to learn and get better at, absolutely, but that’s top of mind right now. I’m lucky to work with amazing collaborators and editors who are invaluable in making that something I’m getting better at. But it’s also part of the medium, as I’ve noticed now tackling an ogn where there’s a lot more room to breath, so to speak, and the project is more fluid and organic (sorry for the buzzwords).

For me, any time I’m not sleeping (which I don’t do much of). I don’t really have a preferred time of the day to work. If I’m awake, I’ll be working. I do, however, need about an hour after waking, to feel human and get coffee’d up.

I could go on four hours about creators who’ve inspired me, and continue to do so. There’s just so many to even begin listing. But I will anyways, and then immediately think of dozens more.

Jason, first and foremost, is a creator that really solidified my love for comics, and I’m just a huge fan, and continually blown away by him. Obviously, obviously Jack Kirby is big for me (and pretty much anyone interested in the medium). Warren Ellis is another one that springs to mind right away. Grant Morrison too. I adore Paul Pope and Kazuo Koike and Katsuhiro Otomo. Geoff Darrow and a lot of Steranko. I really love how Eric Powell dives headfirst into absurdity.