Questionable Comics is a comics creator survey series, with Dan Hill presenting sets of questions to professionals from all corners of the comics industry. Up first this week is Justin Greenwood, who has been a long time collaborator with Antony Johnston at Image and received accolades for Stumptown, his series with Greg Rucka at Oni.

I regularly work on The Fuse with Antony Johnston for Image Comics and Stumptown with Greg Rucka for Oni Press. At the moment I’m also working on Stringers, a limited series with Marc Guggenheim that we’ve been developing for years.

I put a lot of value on efficiency because drawing comics can be really time intensive, and I try to retain some form of order as I work. I’m also kinda spoiled because my studio is right in my backyard, and I keep things pretty simple in there. Outside of my art table and gear, it’s pretty much just piles of reference and a ton of comics.

Probably like a lot of folks, I jump between music, podcasts and television/movies- mostly it just depends on my task that day and how much concentration it requires. If I’m thumbnailing pages or doing layouts, I can’t follow anything so I stick to music. But otherwise, a typical day has me jumping between other media. I’ve been listening to Howard Stern since I was like 15 so that’s in the mix pretty regular. Recently I watched the entire series of Ray Donovan between like 9 pm and 2am over the course of a couple weeks, letting it play while I ink. That show turned out to be pretty good. And if I’m in a pinch, it’s almost always old Rockford Files. I find that show comforting to have in the background on any given night.

“The drawings I like best are the ones that come out easy– if it doesn’t feel right, just start over.” It seems simple, but I used to have a habit of trying to refine a drawing that a lot of times just needed to be redrawn entirely. It helped me approach things more objectively and it was really the right advice at the right time for me.

That’s a good question and I don’t think there is really one answer. Some days you wake up in art mode, and you are on point from the minute you sit down. But there are times when you don’t even want to sit down at the table, and the trick is finding ways to keep yourself invested. For me, a big one is leaving off at a point that I know I’ll look forward to jumping in on the next day, like leaving some half-inked pencils on the desk that I know I can’t wait to tackle tomorrow.

I work on paper, mostly with a brush when inking. I think a lot about doing the preliminary work digitally because I can see the benefits of being able to adjust so quick, but I haven’t made the jump. It’s hard for me to imagine not inking traditionally though, it’s a lot of what I find satisfying about making comics.

I have a LONG list of specific aesthetic things I’m constantly trying to work on with my art, but recently I’ve been really focused on my own headspace and finding ways to stay objective. When you are working freelance in a deadline-based industry, it gets harder and harder to see what is right in front of you and I think managing that is a skill we’d all like to get better at. So much of how your week is going is really just based on your perception of what you think you could have done, rather than what you’ve actually accomplished. It’s all about finding a balance– the better I get at it, the happier I seem to be with my work.

I have two kids under the age of five, so my schedule is completely dependent on theirs. But a typical day has me starting around 9:00 AM and working until around 6:00 PM (with a 90 minute window in there for running my daughter around after her preschool). By that time, I try and put everything aside for dinner and spending some time with my family. And most nights once everybody has conked out, I’ll sneak back out to the studio and work some more.

It’s such a great time in comics! It feels like there are more unique and interesting voices in comics than I can recall ever seeing. My favorite artists coming up were folks who leaned towards design over realism: Mignola, Risso, Oeming, Lapham, Leon, etc. Recently I’ve been so impressed with new emphasis on storytelling and style, artists like James Harren, Jason Latour, Greg Hinkle, Annie Wu, Joe Infurnari, Wes Craig to name a few. Comics is on fire right now, and I just hope this rise in popularity continues to bring in more and more fresh voices to the industry. 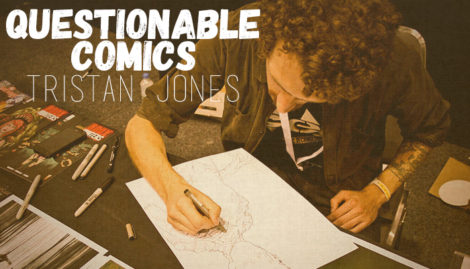 The second Questionable Comics this week is with Tristan Jones, who has worked on some of the best licensed comics in the industry, including Aliens at Dark Horse, Teenage Mutant Ninja Turtles and Ghostbusters.

It’s literally a nook. I long for the day that I have an office to myself. A few years ago I had a really great space in an apartment in South Melbourne (here in Australia) that looked out over this really great district– parks, inner metro, things happening all the time– it was great! Spacious too! Since then I’ve had to cram everything into corners, just because of the places I’ve lived in since. It’s a desk with a Cintiq and monitor on tiered counters, with shelving attached overhead. I’ve got another shelf immediately to my left full of records and the record player right next to the cintiq. Everything lazily within reach . . .

Scores usually. Right now Goldsmith’s Alien score is on high rotation, for obvious reasons, but I do love old James Bond scores– kinda blurs the lines between orchestral stuff and that sixties/seventies funk sound here and there. Explosions in the Sky get a pretty high play. Same with Godspeed You! Black Emperor. It’s all great atmospheric stuff without having a visual attachment like some other scores do.

A cover of the original Alien poster by Tristan Jones

I tend not to listen to advice unless it’s about how to approach something that’s universally similar. Each creator has his or her own way of doing things. It’s what makes them stand out, it’s what makes you go, “oh yeah, that’s such and such,” so what one person says regarding techniques really for anything — but particularly breaking in or creative process — doesn’t really apply all that well to others unless circumstances are bizarrely similar. Like, biologically similar as well. Sure you get some people who think similarly, but that doesn’t mean they like reading or telling the same stories, or are even influenced by the same people. It’s all down to environment. You just gotta do what feels right to you. I guess the only real thing, and it’s one of those universal notions, is that if you fuck up, own it. Be honest about it, learn from it and roll from there. But that’s not really advice, that’s just common sense really, and you’ll hear anyone say it.

It’s just there. It’s the default setting now. I think so much so that it was probably detrimental to my relationship with my girlfriend. Drawing being a hobby, the line between work and play just faded completely. It’s just always on. It used to be writing, but that evolved into just drawing what’s amassing in my head. It’s actually affected my writing. I can’t script properly any more because I just figure, “Why am I telling myself what to draw when I can just fucking do that right now?” 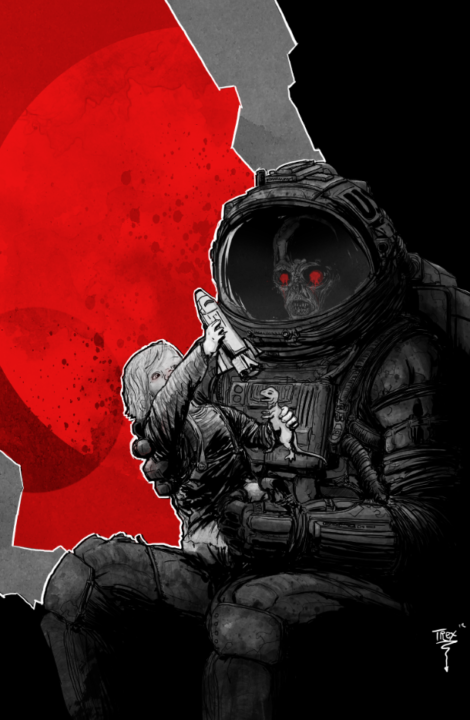 I like to mix it up, but I prefer digital. I can do more things with it, but that comes largely from the film and television background. I love playing with blurs and effects you can only get digitally properly, but I do love things like zipper tone and ink splats, which can be replicated, but takes work to make look as nice as the real thing.

Any time, but I do prefer night. I don’t have as many distractions and I feel like it’s just me, like there’s nothing else I have to do.

Kilian Plunkett. Straight up. My favourite comic artist and one more people should dig up. He does the design work for the Star Wars animated shows now. Both Jorge Zaffino and his son Gerardo are tremendous inspirations. I love their work and Gerardo is one of the hardest working and nicest guys you could meet. Otomo, Mignola, Maleev– all favourites. Azaceta, Gaydos, Lark, Philips. If it’s got a lot of heavy blacks and fine lines generally I’ll love it. Cam Kennedy. I really like Garry Brown’s work, and there’s a dude who does Marvel stuff here and there named Jefte Palo whose work I adore. Nicola Scott and Douglas Holgate are both heroes of mine and people I’m very happy to call friends. Nic’s been a tremendous support and a great friend since the day I met her years ago, like some kind of rad comics mum that parties harder than you do, and Doug’s one of the best sounding boards you could ask for professionally. Both are also the funniest people I know, which goes a long way too.