You are here: Home / Features / Europe Endless: Spooks Vol 1: The Fall of Babylon by Rossi, Dorison and Nury

Europe Endless is a column examining European comics that are now available in North America, ranging from overlooked oddities to classics and everything in between.

America’s tycoon era is ripe for creative pillaging. The Wild West might get all the glory as a fertile ground for outsized characters and legends, but America’s rise as a burgeoning economic power after the Civil War is full of its own cast of rebels, outlaws and larger than life figures. Christian Rossi, Xavier Dorison and Fabien Nury’s series Spooks is an attempt to correct that, following a team of supernatural detectives transitioning from the Wild West to the modern era, investigating an occult plot to take over the merging worlds of commerce and politics at the dawn of the 20th century. The Fall of Babylon, Cinebook’s first volume collection of the series, is a slight but promising work that is beautifully rendered and should appeal to readers who enjoy both The League of Extraordinary Gentlemen and The X-Files.

Spooks’ characters still vividly remember the frontier days, and the Civil War that interrupted the country’s evolution, and as such they’re struggling to adjust in the more technological frontier of the 1900’s, where weaponry and forensics are advancing at a dizzying rate. In the past, the Spooks (SPecialists in the Odd and OCult) worked at the orders of the president get to the heart of mysteries that are decidedly outside the realm of normalcy, but now, like The League of Extraordinary Gentleman, they seem to be adrift in culture, aware that the future is swiftly advancing on them and the adventures that brought them to prominence are diminishing in number.

The Fall of Babylon centers around the suspicious murder-suicides of a number of extremely powerful men, all connected by membership in a secret organization called The Century Club that is seemingly equally out of time, but more direct in its confrontation of that fact. Spooks supervisor Richard Clayton tries to convince President McKinley that the murder-suicides are not random but connected and something horrible is on the horizon, but McKinley is too obsessed with the Buffalo Pan-American Exposition and the progress it signifies to care about Clayton’s theories of a murderous conspiracy (and given what happened in reality to McKinley at the Exposition, that mistake is going to cost him). So Clayton strikes out on his own, reforming his old Spooks team to uncover the mystery as rogue operatives.

Though Clayton is the supervisor of the Spooks, its true leader is Morton Chapel, who is even more lost in time, living in what’s left of the Wild West, putting his talents to waste in poker table brawls. Much of the first volume follows Clayton and Chapel as they put the band back together, most of whom are just as astray as Chapel. All of the characters more or less fit expected archetypes; Angel Salvaje is the mystic, an indigenous priest specializing in exorcisms, Joey Bishop is the psychotic marksman, Bart Trumble the brawny but lovable giant, and Kathryn Lennox is the brainy rebel daughter of a tycoon involved with the conspiracy.

As enjoyable as these characters are for the most part, they’re not really the draw of Spooks. What makes the story stand out is instead Rossi’s superb detail and dedication to building up a world that’s like our own but different enough to be entirely entrancing as it provokes more and more questions. Rossi’s painterly style brings the era of Spooks to vivid life, and his willingness to depict surprising moments of brutality with curious supernatural flavor enables the comic to stand out not only from many of its Eurocomic peers but also from the too frequently drab and lifeless American indie comics trying to do similar hybrids, like its Oni successor The Sixth Gun. Dorison and Nury’s script is mostly thoughtful and engaging and they bring similar detail to their historical connections, though Salvaje’s character stands out as a weak, problematic link in the otherwise more progressive series. 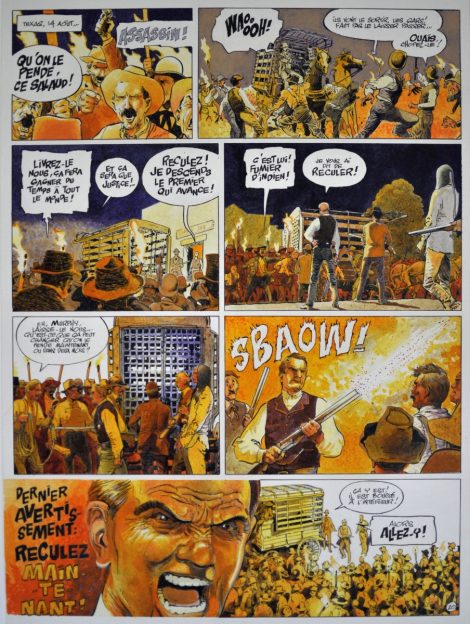 That said, The Fall of Babylon is an excellent set-up for the series, combining the cleverness and retro accoutrements of The League of Extraordinary Gentlemen with the mystery and world building of The X-Files. It may not be as epic in scope and design as some of its more fantastical peers, but Spooks is an engaging, pulpy work that’s easy to get into and hard to put down.

Spooks Volume 1: The Fall of Babylon is available now through Cinebook.