You are here: Home / Features / Trophies of Over Indulgence: A Look Inside the World of Gainers

My skinny jeans fit a little more loosely today. Maybe I should eat some more. I’m alone in my apartment, as usual for a Friday, except I’m actually going somewhere tonight. An original pressing of the Beach Boys’ Pet Sounds is spinning on my turntable, blasting “God Only Knows” throughout every room in the apartment. I spit after a few seconds of brushing my teeth, and the normally minty white loogie is stained a dark red. My gums are bleeding again. Could be from the stress, could be from my shitty brush, could be from the fact I forgot to brush yesterday. All I know is that my pearly whites are ruby red, and all I can do is smile and laugh at my reflection. I rinse out my mouth, slap on some Speed Stick, and I’m ready to leave.

I arrive at Torchy’s Tacos, an Austin staple with their $4 tacos and quirky signage. It’s rather busy here, considering most people around this time are pre-gaming at their houses before they head off to 6th Street to drown their sorrows and throats in overpriced well-booze. But I guess tonight people are drowning those same two things in queso. I walk inside and look at the menu. I don’t understand how these people can afford these tacos. But I’m not here to eat, I’m here to observe. And the people I’m supposed to observe aren’t inside. It’s 7:00, so it should have started already. Maybe they’re outside. More room that way.

I found out about this “attraction” on a late night newscast during a bout of insomnia, in between the 30 minute long commercials on the Nu-Wave Oven and the Shark Steam Mop. Why there was a newscast about sexual fetishes on Lifetime at 4 in the morning, I have no clue. But it was there, I swear. In a culture where thin and muscular are the ideal, where double digit weights are idolized, they saw big as beautiful. Not big like curvy. Not big like muscular. Not big like natural. Overweight, obese, immobile. Diabetic, artery clogging. All sexy in their eyes. And they have a name: Gainers. 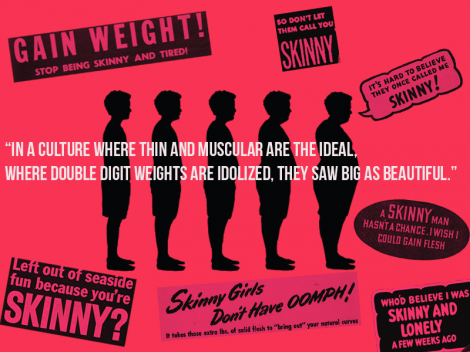 Primarily a gay sub-sub culture, (original sub-culture being “bear” which is just gay men who have more typically masculine features, such as beards and whatnot) gainers get their kicks from already fat or obese men, gaining weight themselves, or watching people slowly become fat through over-eating and sloth. “Fat ass” and “tubby” are terms of endearment between gainers, clothes getting smaller are met with congratulations. But the holy grail of gaining is the gaining of fat stretch marks– on the stomach, back, arms. Whoever has them is idolized, like a permanent trophy of over-indulgence.

Although I am repulsed by the gaining culture, I am also fascinated by it, in the same way people research the Holocaust. After seeing the report, I found there are many social media tools through which they communicate and share their updates with each other. YouTube has some “progress videos”, but for the seedy underbelly of gaining, there is a site called Grommr, a sort of Facebook of gainers, where people post updates on gaining, as well as photos, and videos of they’re progress. And occasionally, there are meet ups at local restaurants or clubs, called “Grommoffs.” And Austin’s is this week.

I walk outside to see a table of six rather large men with two skinny guys, all in their late 20s, early 30s, all eating. Except for one, who looks to be in his mid 50s, with thinning hair and a goatee. He happens to be way bigger than everyone else, by a longshot (or wideshot?). He stands up and starts walking toward me with his hand outreached.

“You Dylan from the e-mail? Writing that story? Name’s Kurt, nice to meet you!” he says with a slight southern drawl. “Don’t worry, I filled the fellas in, they know what you’re here for, though it’d be nice if you ate too, you’d look hotter bigger, buddy.”

I felt objectified after only being here for 15 seconds.

We both sat down, and I watched. The men didn’t seem bothered by me, focusing instead on their meals, and occasionally looking one another up and down, half seemingly for intimidation, half attraction. It was almost a competition, watching these guys eat. Their chewing made this slight squishing sound, like eight guys simultaneously wringing out a kitchen sponge. They weren’t enjoying the tacos and chips and queso. It was merely fuel. This Grommoff could have been at a tofu restaurant, and it would have been the exact same. However, to my surprise (and for the point of this essay, disappointment) there was no talking about gaining. Movies and TV shows, football scores, everything but gaining. I can’t tell if they were just afraid of talking about such a bizarre lifestyle, or what, but I was starting to get a little upset. I wanted to know more about these people. Is it just an online obsession that can’t ever manifest in the real world? They say never meet your heroes, does the same apply to objects of arousal? I almost left, until they started finishing their meals.

Kurt finished first, of course. And as many men do after eating a large meal, he leaned back in his chair and started rubbing his stomach. But while most people just rub their stomachs for a few seconds, Kurt kept rubbing and patting his. Then, as the other men would finish, they would follow suit, leaning and rubbing. Until there were eight adult men, rubbing their bellies in a public restaurant, in sync, while staring at each others’ stomachs. And no one else seemed to notice! After a minute or so of tribal patting, things got weird. Kurt started rubbing his neighbor’s belly. Then everyone else followed suit again, rubbing each other’s bellies. I watch, confused not only by the ceremonial feeling, but also by the fact that no one is noticing eight grown men are in a rubbing circle at a taco joint.

Eventually, the fun comes to an end, and the guys share a collective laugh at both the absurdity of what just happened, and my face, which was a combination of confusion and disgust, like how I look while watching those plastic surgery reality shows. Then one by one, the guys start leaving, heading to their houses to get ready for the after-Grommoff at the Iron Bear (the local gay bear bar). But I wanted more. There was not nearly enough material for a story. And it was 8 o’clock on a Friday night, the day was not over. Maybe I was catching a contact food high, maybe the Torchy’s devil baby told me to, but I did the unthinkable. 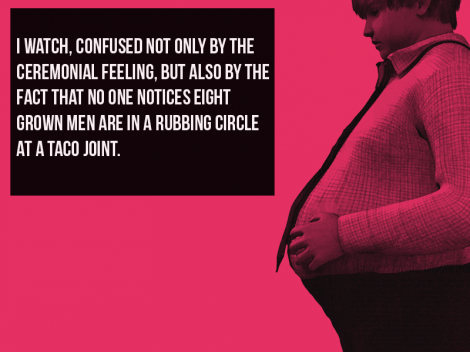 “So, Kurt, mind if I come to your place and ask you a few more questions while you get ready for the afterparty?”

Kurt’s truck smells like weed and Taco Bell; surprising for a school teacher’s car to smell like mine did in high school (his staff ID was hanging from the rear-view mirror). His stomach can barely fit in between the steering wheel, and his seat doesn’t go back any farther. After about a two minute silent car ride, we pull into a rather large apartment complex. It’s around 8:30pm now.

“Welcome to Chez Kurt,” he chuckles as he waddles up three flights of stairs to a door littered with dying potted plants. “It’s a little messy, watch out.”

In every episode of Hoarders, there’s a musical cue when they first show the messy house that sounds like a “meeeeeeep.” When I walked in to the small one bedroom apartment, I heard the “meeeeeep”in my head. There were piles of newspaper, piles of pizza boxes, piles of stuff. The coffee table was covered in McDonald’s and Burger King cups. The dining room table was covered in wires and papers. An entire apartment covered in shit. Planet of the Apes plays on the TV.

“So, what’d you wanna talk about, buddy?” Kurt asks as he starts to unbutton his shirt. 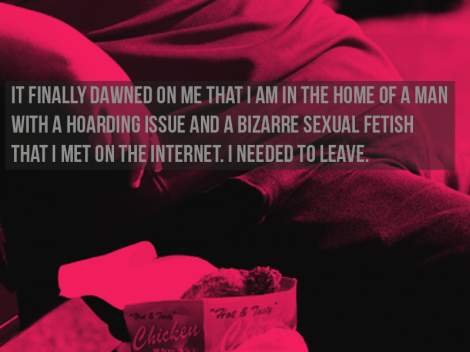 I didn’t even know what to what to say, what to ask. But it finally dawned on me that I am in the home of a man with a hoarding issue and a bizarre sexual fetish that I met on the Internet. I needed to leave.

“Well, Kurt, you know, I should probably head out, I actually have enough for my paper” I say, as I start to back up toward the door.

“No, son, sit down, it won’t be too long, whattaya wanna know?” Kurt replies in the same tone the doctor uses when he says the shot won’t hurt.

“No. What do you want to know?” Kurt growls as he turns off the TV, thus drenching the room in darkness.

This is what Dahmer’s victims felt like before they were Dahmer’d. I tried to open the door to leave, but the security chain was on. I didn’t give a fuck, I ripped it open in a burst of adrenaline. Kurt started yelling after me, something about how I’ll have to pay for his door. I didn’t care, I ran. I didn’t know where I was, but I ran. I knew where the skyline was, so I started running toward there. I’ve never ran that far or fast, but I knew I had to. He could have gotten back in his truck, he could have followed me, he could be right behind me.

I ran. I ran until I found a bus, and I went home. I needed to calm down. It was 10:15, and I felt it was a good time to turn in for the night. It’s been eventful enough. Pet Sounds is still spinning in the last groove; I forgot to turn it off. I place the needle back on “God Only Knows” and look at myself in the bathroom mirror. Apparently I bit my mouth while running, because my teeth were just as red and bloody as they were earlier. All I could do was smile and laugh. Then it hit me: I’m hungry.

Dylan Garsee is a freelance writer/bingo enthusiast currently living in Austin, TX. He is studying sociology, and when he’s not winning trivia nights at pork-themed restaurants, writing a collection of essays on the gay perspective in geek culture. An avid record collector, Dylan can mostly be seen at Waterloo Records, holding that one God Speed You! Black Emperor record he can’t afford and crying. You can follow him on twitter @garseed.