You are here: Home / Features / Yellowed Pages: Cosmic Odyssey Is Basically 24 by Way of Infinity Gauntlet

Sometimes we just want to talk about old comics we found in bargain bins or antique stores or in our garages. Is that so wrong? Today we’re looking back at Cosmic Odyssey, a DC crossover event drawn by Mike Mignola (!) and written by Jim Starlin that is most famous for featuring a scene where Martian Manhunter tells Green Lantern to kill himself. No, seriously.

If you’re a monthly superhero comics reader, crossover events are annoying. Marvel and DC will (rather frequently) come out with a miniseries that changes the nature of the superhero universe and suddenly all your comic stories pivot to service an otherwise unrelated comic that you’re now required to buy just so you can understand what’s going on in the comic you were already reading. Imagine you’re a viewer of TV’s Bones and then suddenly Mr. and Mrs. Bones have to team up with Jack Bauer and Dr. House to stop a rare virus that’s also the leader of a vast network of terrorists — and this happens for three episodes every six months.

But fuck people who read superhero comics month-to-month, myself included. Events pretty much rule — they’re comics that have a bunch of superheroes dealing with huge, world-changing stakes, full of beautifully dumb spectacle, and they only last a handful of issues. The perfect way to read superhero comics is to only read event books and avoid all tie-ins entirely. If you have to read a bunch of other comics at the same time to understand what’s going on in the main series, it’s a complete and utter failure. That’s why Final Crisis is my favorite superhero comic book of all time and why Infinity is complete gibberish to me. Don’t be coming at me with no checklist — you numbered the first one #1 and the last one #6, but I gotta read a #18 and a #9 before I read a #2? That makes absolutely no sense.

Some of my favorite event crossovers are DC Comics from the mid to late 1980s, partially because those are the issues I’d dig out of back issue bins as a kid and partially because they’re DC’s best era of cape comics, a period that gave us Justice League International, Suicide Squad, Watchmen, Animal Man, Peter Milligan writing Batman for some reason, and a Green Arrow you could respect, not to mention my second favorite crossover ever, Invasion!, a comic that goes so hard that it needed to be titled with an exclamation point.

Cosmic Odyssey comes from this era, and sports* a rock solid creative team. It’s written by Jim Starlin during that weird, brief period where he was working at DC Comics and scripting Batman circa Robin being murdered via telephone hotline and illustrated by Mike Mignola, who I always forget had a life before Hellboy. Mignola is inked by Carlos Garzon, a man who has no Wikipedia page, so I had to look him up on Wookieepedia and write about him in passive voice. Rounding out the creative team is computer coloring pioneer Steve Oliff and the Greatest Letterer of All Time, The Mighty Thor’s John Workman. It’s a creative team that justifies publishing all four issues of Cosmic Odyssey in a perfect-bound, “prestige format” at $3.50 a pop. I think I paid less than half that at a Free Comic Book Day sale.

The set-up for Cosmic Odyssey is certainly worthy of an event comic: Darkseid, the evil New God of the planet Apokalips, discovers the body of a scientist New God known as Metron — imagine if Mr. Spock traveled the universe in a floating chair and nobody was ever really sure whose side he was on — rendered broken and catatonic. This revelation signals the existence of an immensely powerful being in his midst, which Darkseid simply cannot abide because he wants to be the ultimate supervillain. As a result, he teams up with his rival, the noble Highfather of New Genesis to locate and defeat this thing by enlisting the most capable superheroes:

They quickly find out that this being is actually the Anti-Life Equation, “mathematical proof of the futility of living” which allows its user (calculator?) to control all living beings. It’s best known as “the thing that Darkseid is always after in every story ever.” But it turns out that the Anti-Life Equation is more than just a formula — it’s a sentient being from another dimension and four “aspects” of the Equation have made their way to our dimension with the intention of each destroying one of four planets. If at least two planets are destroyed, the entire galaxy goes along with it.

Just replace “planet” with “buildings,” “Anti-Life Equation” with “the terrorists,” “galaxy” with “Los Angeles,” and “the most capable superheroes” with “Jack Bauer” and you have an entire season of 24. Even the methods by which the planets are destroyed are just bombs — bombs powered by anti-matter, sure, but bombs nonetheless. This makes the title Cosmic Odyssey a misnomer, as it implies an adventure on a scale much grander than “that planet’s gonna blow up.”

Nonetheless, Jim Starlin — who dreamed up a good portion of Marvel’s weirdly Jungian space characters (including the explicitly Darkseid-inspired Thanos)  — is, on paper, the perfect writer to be spearheading a comic called Cosmic Odyssey. In execution, however, Cosmic Odyssey is structured like the most epic Justice League of America comic ever made, adopting the original format the book had back in the 1960s, where characters would split into teams of two to tackle various aspects and effects of a given story’s big crisis. In Odyssey, each superhero pair heads to defuse a different bomb, while Darkseid and Jason Blood go off and try to visit the equation itself. You kinda get the sense that he hasn’t read a Justice League comic since 1962.

Despite the harkening back to (at the time) 20-year-old comic books, there are huge stakes and dire effects, at least within the confines of the miniseries itself — who cares otherwise, because at this point the thing is over a quarter-century old and whatever happened in this comic surely didn’t survive a quarter century of reboots and retcons. The plot is resolved within four issues and character arcs set up in the early issues pay off in the later ones. It never feels like you have to read beyond Cosmic Odyssey to get the whole story of Cosmic Odyssey. By contrast, nearly every subplot introduced in the massively/confusingly popular Identity Crisis is resolved in some comic that is not called Identity Crisis, so if you want any sense of closure you’d have to read some really bad JLA issues and some Flash comics I never even bothered to look up.

After years and years of dark corners and Dave Stewart colors, it’s weird to see Mike Mignola draw anything else other than Hellboy, especially a DC event comic, but Mignola brings his trademark huge figures, gigantic mouths and heavy shadows (good thing Batman is a character in this thing) to bring a dark moodiness to a space adventure story. Most readers are used to seeing Mignola’s art rendered in moody earth tones with shocks of bright red, so Cosmic Odyssey further surprises as Steve Oliff’s colors uphold the typically bright colors of the DC Universe, providing a much-needed counterpoint to the dire linework.

Both Starlin and Mignola are artist/writers, and Cosmic Odyssey finds their styles hybridized. Obviously you can look at any panel in this thing and see Mignola’s style in full swing, but you also see a lot of Starlin’s penchant for ridiculous staccato sequences in play in the storytelling. But it’s never as insane as some of Starlin’s old/stoned Captain Marvel stuff — though there is at least one sequence of an eye slowly opening — in this book it’s expertly (if frequently) employed to punctuate moments or to slow the pacing of a page. Otherwise, Mignola’s more sparse, wide layouts tend to be the primary rhythm of the book.

That said, at Cosmic Odyssey’s most extreme in terms of Starlinisms, part four opens with a countdown that further supports my 24 comparison:

That ticking timebomb carries on throughout the issue, heightening the tension — it’s been done a million times in movies, but god dammit, it WORKS — as Batman and the bad guy standing in his way get into a fight. Not a battle — a FIGHT. And it’s knock-down-drag-out in a way you rarely see in superhero comics these days. It’s a trope they need to bring back — characters just having a FUCKING BRUTAL fist fight. Torn costumes, hair poking out of holes in cowls, the whole shebang. Superhero comics are often action comics, yet an unforgivable number of them really suck when it comes to the actual action. It’s like nobody learned anything from Frank Miller. It’s why people love Dragon Ball Z so much — when it’s time to fight, they fight hard.

In the end, the day is saved, the Anti-Life Equation is thwarted, and Forager sacrifices himself, proving to the New Gods that he is indeed something special. The best part, however, is — whoa — something involving Green Lantern. Portrayed as a headstrong dickhead the entire book, John Stewart ends up failing to stop his bomb, causing an entire planet to explode as a result.

He gets suicidal over it.

Then comes his partner, Martian Manhunter, who straight-up tells him he should probably kill himself. 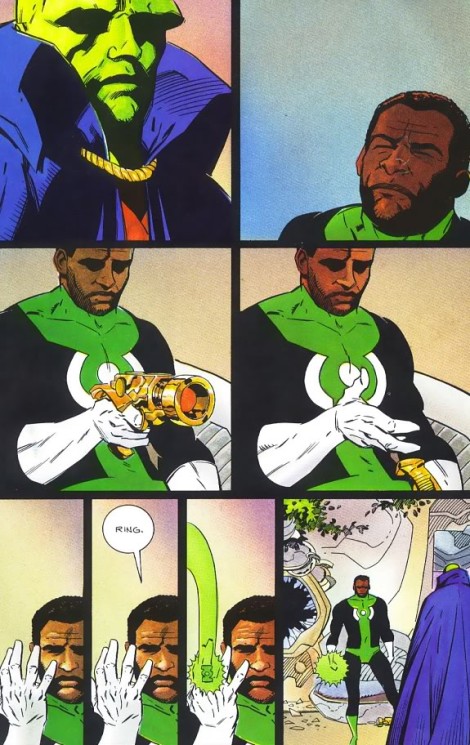 That above bit alone is worth the price of admission. It’s some ballsy shit, and doesn’t come off as cheap or lame as a lot of the faux-gritty stuff does further down in the post-Watchmen years. These days every single DC comic has some kind of fake Jim Lee homunculi being Luke Skywalker for a day and clutching a wrist stump, but that’s not nearly as hardcore as Green Lantern being urged to kill himself by an alien as a dispensing of blunt force reverse psychology.

So basically, Cosmic Odyssey has everything.

*Can I use the word “sports” in an article about a comic book?

Danny Djeljosevic is the co-founder of Loser City and the writer of The Ghost Engine. He also just put out Kids Rule!!!!!, a comic that is definitely not for kids and actually features no children.

Cats Rule Everything Around Me