My initial plan for this week was to purchase Assassin’s Creed: Unity and write up some impressions for my weekly Loser City thing. We’re a pretty small operation here, and it can be hard to get review copies of games when you’re a small operation, so if I’m really interested in a major release I tend to get it out of pocket like everybody else.

This ended up looking like a pretty bad idea. I may end up purchasing and writing about Unity in the future, I’m very interested in the French Revolution and had pretty high hopes for the game, despite reservations, but the general consensus is that as it stands the newest Assassin’s Creed is a pretty okay game marred by some pretty egregious technical flaws that render parts of it nigh unplayable. 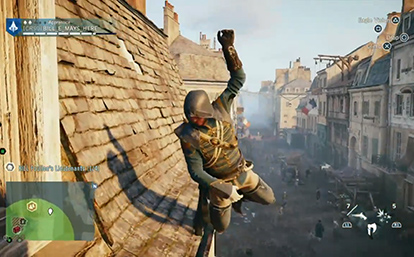 I don’t think he’s supposed to be doing that.

That’s unfortunate, and I have had trouble seeking out another game or smaller release to put time into and discuss this week, partially because of a very weird wrinkle in the coverage of Assassin’s Creed: Unity. According to a stipulation by Ubisoft, sent with review code of the game, no reviews were to be posted until noon of November 11th, twelve hours after the game was released. I didn’t hear anything about the game’s issues until right before I was planning to play it.

This seems worth talking about. Review embargoes are full-on insider baseball, something games writers will mention every once in a while without diving into much, but they’re incredibly relevant to the type of consumer who reads reviews, and I wish publications would disclose the terms of these stipulations more often.

Generally, here’s how it goes: When sending a publication an advance copy of a game for review, the publisher of the game will often request (for a thou-shalt-not possibly legally binding value of “request”) that the publication refrain from putting up any review coverage until a certain date. When varies, depending on a lot of factors. but generally they’re anywhere from a week away from the release date to a couple days before to, at the latest (except for Unity), the time of release itself.

These embargoes seem pretty reasonable in theory, and the purpose they serve makes sense. As Chris Kohler says over at Wired, “Embargoes on game reviews prevent a race to the bottom.” To put it another way: to evaluate properly, games take time. The hours logged to play them, but also time to sleep on them, to process, to consider and dissect your experiences in them. In a world without embargoes, click-hungry sites would be tempted to shit out their reviews as quickly as they could, offering half-formed opinions on twenty-hour experiences just to get views. This would be a net loss for everyone; there’s enough shitting out of reviews as it is. Critical opinions on games can evolve and change over months and years of consideration. At the bare minimum, you need to sit on a game for a few days before you should be allowed to talk about it in a critical context.

But it’s when these embargoes get close to the release date that the matter gets trickier. In the specific case of Unity, the embargo was actually post-release, a practice that I have never heard of for any other game. It’s a bit egregious: Ubisoft requested that writers not publish opinions on a game until after their readers could buy it and begin forming opinions of their own. This practice, and even embargoes that fall immediately at the time of release, don’t have the veneer of consumer protection: they look and sound suspiciously like gag orders, an attempt to keep reviewers from divulging opinions that might hurt the early sales of a game. In these instances consumers only have marketing materials and their own judgment to base an opinion on, and that lack of knowledge can be distinctly helpful to publishers trying to sell products that might be, like Unity, glitchy messes at launch. Indeed, while I haven’t done any statistical analysis or anything, just anecdotal evidence from this year proves my point: Destiny had an at-release embargo, and when the reviews came in they proved a lot more reserved than the GOTY prospects the game had held beforehand, and Unity has fared similarly.

I’m a bit ambivalent about the whole thing, to be honest. I don’t think reviews of any piece of entertainment or art should solely function as consumer guides, and often the tastes of reviewers can be fairly out of touch with a lot of the consuming audience (after all, the type of interest that makes you want to write extensively about a medium isn’t the same type as the interest that makes you just want to consume it). So I don’t think it’s the end of the world if a review doesn’t come out before or at release. Often I prefer reviews that wait, giving more nuanced, measured takes sometime after release, when the reviewer feels they have spent enough time to have a strong opinion.

But I do think review should be partially consumer guides, giving an honest take on a reviewer’s experience with the media object in question and telling whether or not the reviewer thinks that experience was worth the time it took to have (I’m not entirely sure I’m on board with the idea of art being measured by utility as I describe it here, that still feels too capitalistic for my tastes, but I have other points to make so we’re not going to overcomplicate this today). Among whatever else a reader is interested in getting from a review, they also want to know whether or not the reviewer thinks they should seek out the media in question.

And games add in the additional question of technical quality: does the game even work? If it doesn’t, I do think reviewers have a responsibility to share this information in a timely manner, and late embargoes can directly hinder them from doing so, leaving consumers in the lurch like I found myself on Tuesday. Games straddle a line as both art products and tech products, and if the tech aspect fails, that’s less a question of a bad piece of art and more a question of a broken product that needs a recall.

Press response to Ubisoft’s egregious Unity embargo has been mixed, with Kotaku’s editor-in-chief Stephen Totillo emphasizing that Kotaku will no longer accept review copies with a post-release embargo attached to them, while other writers, like Polygon’s review editor Arthur Gies, taking a more circumspect approach, suggesting that the thing that serves the readers best is the earliest reviews possible, even if that means accepting a ridiculous embargo. That’s better, by that rationale, than waiting for release and getting up a review much later than the embargo period anyways.

For my part, I tend to lean toward Kotaku’s stance, though I’m sympathetic to the desire to maintain a good relationship with publishers and to give readers review content as close to when they expect it as possible. Regardless, I think attempting to hamstring a publication’s ability to talk about a release after it’s on the shelves is insulting, and I hope Ubisoft has learned its lesson. At the point of release, your game is public, and anyone should have the right to say whatever they like about it. Unlike Gamergate’s nonsense, I think this is actually about ethics in games journalism: if you want to write about something, you should endeavor to tell the truth about that thing to the best of your abilities. If gaining access from a publisher means compromising your ability to tell the truth when it’s needed, then I think you should reject that on face. Otherwise, you might have to bite your tongue while you readers are treated to this: 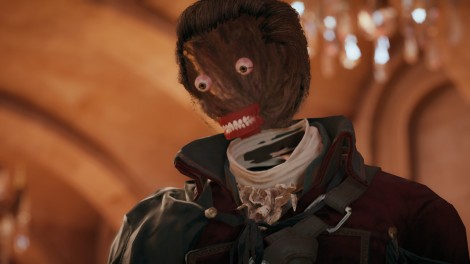 And I wouldn’t wish that on anybody.

Jake Muncy is a freelance writer, editor, and poet living in Austin, TX. In addition to functioning as Loser City’s Games Editor, his writing appears on The AV Club, Ovrld, and anywhere else he can convince people to post it. You can contact him by email or twitter, where he tweets regularly about video games, the Mountain Goats, and sandwiches. He has very strong feelings about Kanye West.